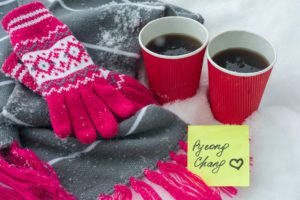 I love watching the Olympics because it is incredibly inspiring to watch people perform at the top of their field. There are many lessons we can learn from high-performance athletes about thriving in stressful situations. Here is a great example.

Antti Koskinen, the Finnish snowboard coach, was caught knitting at the 2018 Pyeong Chang Olympics just as athlete Roope Tonteri was preparing to race. No doubt, Koskinen did this to keep himself (and his athlete) calm.

Team Finland was also caught knitting at the 2014 Winter Olympics. They were working on a scarf which they passed off to the summer Finnish Olympic team to take to Rio de Janeiro in 2016. In a 2014 Yahoo Sports interview, Koskinen said he pulled out the knitting to keep things light before competition.

Tonteri shared a similar philosophy as his coach: “The most important thing is to have fun on the slopes and enjoy your riding,” he said.

It has been well documented that none of us thrives under pressure, even Olympic athletes. Though Tonteri didn’t win a medal, Koskinen’s knitting and calming mindset likely helped the athlete perform at his best. Research shows 90% of top performers are skilled at managing their emotions in times of stress to remain calm and in control.

We don’t all have to take up knitting but it’s certainly worth exploring what sets us up to thrive before our next big “game”.

What works for you?