5 lessons for a winning mindset from Olympic athletes

Previous Next
5 lessons for a winning mindset from Olympic athletes

We all face challenges and set-backs. But what sets us apart is how we handle our stress. 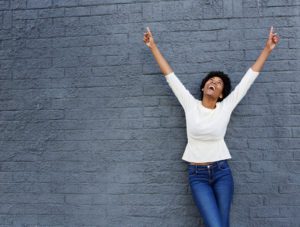 Olympic athletes are no strangers to pressure. Many spend their entire lives training for their events. I can only imagine the potential overwhelm they may feel, moments before their competition, with the world watching and the weight of their country’s expectations on their shoulders. How do they handle the stress?

Clearly, physical training is crucial. But athletes recognize the top six inches (i.e., their head) matter just as much as the rest of their body. Mental toughness is considered the key differentiator among the best of the best. Thankfully, this mindset isn’t simply something you’re born with or not. It can be developed over time and is within reach for all of us. Here are some of the mental strategies elite performers employ.

The Olympics are an incredibly distraction-rich environment, from the media to medal celebrations to the general buzz of the Olympic village. Sports psychologists say it’s important to manage these distractions. Their research demonstrates something athletes have known for years: pre-performance rituals help athletes feel less anxious and stressed. As a result, they end up performing better.

Canadian figure skating Olympic heroes, Tessa Virtue and Scott Moir established a calming ritual many years ago. They hug. This simple action helps them calm their nerves and connect before they step on the ice. Another example of a calming ritual that really stuck out for me (and also made me laugh) was the Finnish team’s knitting ritual to help calm pre-race jitters. Apparently, anything can be incorporated into your routine.

Olympian and sports psychologist, Nicole Forrester, has studied how some Olympic athletes live up to their medal aspirations while others fall short. The difference appears to be grounded in mental skills training. Mindset was cited as the reason why Canada’s swimmer Penny Oleksiak secured Olympic gold in the 2016 Rio Olympics, beating out strong competitors. Forrester describes mental skills as key to help athletes manage stress, block distractions and elevate confidence.

Clara Hughes is one of Canada’s most decorated Olympians with six Olympic medals in both the Winter (speed skating) and Summer (cycling) Games. Hughes speaks openly about her own battles with mental health. At the same time, she credits her involvement with Right to Play as inspiration to push herself and pursue her dreams. “If you dream and you allow yourself to dream, you can do anything.”

Another great example of a five-time Olympic gold medalist embracing a positive mindset is American swimmer, Missy Franklin. Franklin works hard to keep pressure in perspective: “If I’m ever really stressed out or nervous before a race, I start to think about the things that aren’t going to change in my life, regardless of what the impact of that race is.”

As Charles R. Swindoll famously said, “Life is 10% what happens to you and 90% how you react to it.” Olympic medalists truly embrace this attitude. After all, there are many bumps along the way towards Olympic victory. But these elite performers recognize they can achieve success, even with a set-back.

Take Patrick Chan for example. Despite stumbling during his routine, he still managed to secure first place and accumulate precious points for his fellow Canadian Olympic figure skating team at the 2018 PyeongChang Olympics. How was this possible? Chan pushed himself more than his competitors and his challenging routine earned the most points, despite the stumbles. He wasn’t afraid to fail and pushed himself to test his limits.

Being able to come back after a set-back is perhaps the true marker of an Olympian. Canadian snowboarder, Mark McMorris, has suffered serious injuries several times in his career – and almost died after a snowboard crash in 2017 – but he remains focused on reclaiming his enjoyment of the sport. “It’s just snowboarding at the end of the day. For sure, it’s serious and all, but have fun.”

Years ago, I had the pleasure of listening to three-time Olympic medalist Silken Laumann speak about her journey. She shared how a year before the 1992 Barcelona Olympics, she went to Spain specifically to see where she would race and visualize herself crossing the finish line as a champion. Surely, this effort paid off when she experienced a devastating injury just ten weeks before the Olympics. Laumann fought back and won the bronze – an incredible accomplishment.

Jonathan Toews, two-time Canadian Olympic gold medalist in hockey also believes in the power of intention. “You become what you think about and focus on the most. See yourself attracting the things you want to accomplish. Thoughts and desires in your mind can become a reality.”

Believe in yourself, not your fears

Kerri Strug, who helped her gymnastics team secure Olympic gold in Atlanta in 1996, performed her final vault event with a broken ankle. While Strug didn’t realize how badly she had injured her ankle during her first vault jump, she still managed to jump again and help her team secure the win. It is hard to fathom how she could excel despite this setback. On reflection, Strug talks about the importance of trusting in her preparation and blocking out distractions. With wise words we could all learn from, Strug said her most valuable lesson was to “believe in myself and dreams, not my fears.”

Then, there was Akwasi Frimpong who grew up in a one-room house with eight siblings in Ghana. He didn’t let hardship define him though. He overcame the odds to compete as his country’s first skeleton athlete in the Winter Olympics. No, he didn’t win a medal. But his grit and determination won him admiration around the world. As Frimpong said, “Anything is possible as long as you believe in yourself and you want it bad enough.”

Olympic inspiration: The power of connecting